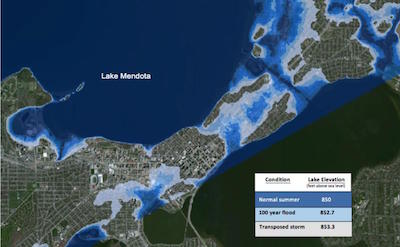 How society should respond to climate change may be a global-scale debate, but NE CSC PI Kenneth Potter and Affiliate Investigator David S. Liebl know that preparing for climate change’s impact on weather is a profoundly local problem.

Potter, a professor of civil and environmental engineering at the University of Wisconsin-Madison, and Liebl, a UW-Madison faculty associate in engineering professional development, are combining their respective strengths in water resource management and outreach to help local communities better understand their vulnerabilities to large storms stoked by climate change. The two have developed a computer modeling tool that essentially transposes rainfall data from a recent damaging storm in one area to a nearby area that might reasonably be expected to share the same weather and climate conditions. In a prototype recently showcased on the National Oceanic and Atmospheric Administration U.S. Climate Resilience Toolkit, Potter and Liebl took the storm that caused the disastrous Baraboo River flood of 2008 and shifted it southeast to Madison.

By computationally slamming heavy rains into the topography of Madison and the structure of the Yahara River Watershed, the model went beyond statistics to yield concrete predictions: Floodwaters from Lake Mendota and Lake Monona would reach clear across central Madison’s isthmus. Lake Mendota would break its banks, forcing officials to close down Dane County Regional Airport.

“It turns out that many people who influence public decisions are not very comfortable with statistically based predictions,” Potter says. “But a storm that occurred recently, where people witnessed a lot of damage, they know that could have happened 30 miles further south, so they tune in better.”

These predictions helped the researchers show state, county and city officials where the area’s infrastructure might be vulnerable, which in turn will help the area prepare itself for extreme weather. That’s a lot better than building up infrastructure that doesn’t take storm predictions into account and hoping for the best: In their Climate Resilience Toolkit article, Potter and Liebl highlight the city of Reedsburg, Wisconsin, which before the 2008 storm had built an expensive berm along the Baraboo River, only to find out that it wasn’t enough to protect the city’s wastewater treatment plant.

The tool has its limits—for instance, one could only transpose the Baraboo storm so far, as it wouldn’t accurately reflect weather events in other parts of the country. But it does give stakeholders something more local and familiar to grab onto as they work to understand the climate-related problems they might face. Potter points out that most statistical and modeling approaches to precipitation aren’t that useful to city- or county-level planners. Some global circulation models divide the entire state up into three grid areas, providing averages that would be a bit crude for, say, civil engineers plotting out worst-case storm scenarios in Dane County—and, just as importantly, such relatively crude data isn’t a great starting point for a conversation about climate readiness. “Rainfall can be very local,” Potter says. ”There are a lot of variables, and we felt that it would be difficult for decision makers to act on that kind of information.”

Throughout this project, the researchers have continually engaged professional engineers and officials at cities and counties around the state, and state-level officials and scientists at the Wisconsin Department of Natural Resources. Their ultimate goal is to build a computing tool that officials around the country can use to identify vulnerabilities and potential improvements in local stormwater-management infrastructure.

The key challenge, in both scientific and outreach terms, is to build something that will resonate on the local level for communities with varying needs, resources, weather patterns and geography. A truly flexible storm-prediction tool would require a database of transposable storms, and likely buy-in from federal agencies to develop computing tools that many cities and counties around the country couldn’t afford to develop themselves. “We’ve used this 2008 Baraboo storm pretty effectively, but it’s limited in that it’s mostly going to be relevant to communities in the region and people who are aware of what happened in that storm, know the locality, know the Baraboo River and how it flooded the Interstate,” Liebl says. “Once you get further afield, you need to find storms that people can relate to elsewhere in the country. The character of storms and the type of rainfall we get here in the upper Midwest isn’t necessarily characteristic of other parts of the country.”

Even in Dane County, Potter says, the researchers want to refine their modeling by incorporating richer detail about the pathways water can take through the local landscape. “Water can go through storm sewers connecting areas that from the topography you wouldn’t think are connected,” Potter says.

For now, the two researchers have established the basis for a tool that not only makes powerful interpretations of weather data, but also resonates with stakeholders’ sense of place.

“I’ve been working for a long time on statistical characterization of storms, and I’m convinced this is going to be a lot easier for people to understand and appreciate their vulnerability,” Potter says.

Potter and Liebl’s research was funded by the NOAA Sectoral Applications Research Program and the Northeast Climate Science Center.