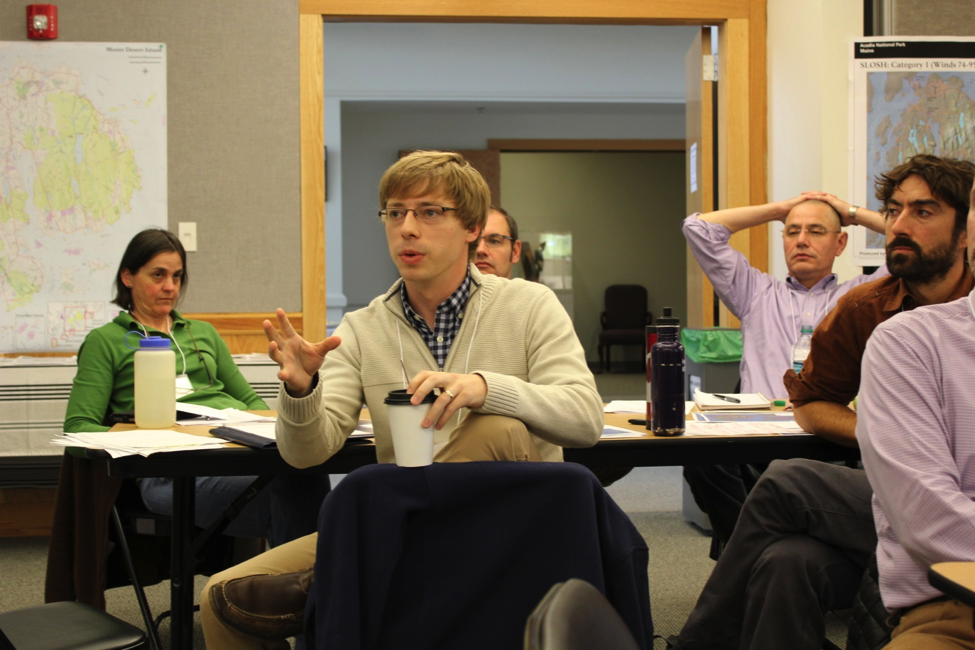 On October 5th and 6th at Acadia’s Schoodic Institute, NE CSC Postdoctoral Fellow Alex Bryan and NPS partners worked with Acadia National Park staff staff to plan for climate change scenarios
affecting the function, protection and operation of one of America’s most treasured parks. Located along Maine's Atlantic coast, Acadia is threatened by sea level rise, heightened storm surge, and heavier rainfalls, in addition to warming temperatures. Longer warm seasons raise public demand to open the park earlier and close later, affecting traditional staffing and maintenance schedules. Warming also puts the Park’s ecosystems at risk of diseases and invasive species, as well as changed habitat suitability. Rainfall events are occurring in heavier downpours, washing out the Park’s historic carriage roads and hiking trails. Along the coast, the popular “Thunder Hole” and other exhibits along the Park’s main loop road, including the road itself, are at risk of inundation as sea level rises and storm surges intensify.
To help managers at Acadia and other National Parks across the country prepare for and adapt to climate change, the National Park Service’s Climate Change Response Program conducts interactive workshops designed to guide park managers through a process known as scenario planning. Scenario planning enables adaptive management in the face of uncertainty by challenging managers to consider multiple plausible futures. In preparation for the October workshop, Alex Bryan and NPS partners consulted park staff to learn their specific planning concerns around climate change. Based on these discussions, they identified the relevant climate drivers, investigated their historical and projected trends, and constructed a set of potential climate scenarios the park might face over the next 25 years based on the analyzed trends and associated uncertainties. Scenarios considered variable rates of warming and changes in precipitation, as well as spans of temporal variability (e.g., interannual, interdecadal). For example, while most scenarios projected varying degrees of warming into the future, one scenario postulated that the warming would be preceded by a slight, but lengthy cooling period as the Atlantic Multidecadal Oscillation shifted from warm (current) to cool phase.  Alex and his NPS colleagues presented the final set of climate scenarios to numerous park managers on the first day of the workshop, and led a discussion of how each scenario might manifest in impacts on the park. On the second day, the participants discussed the adequacy of current management strategies under each scenario, and deliberated new or revised strategies.
The workshop laid the science foundation and preliminary planning steps for the Park’s ongoing effort to adapt to climate change, and as well as established a working relationship between the Park and the NE CSC, such that, going forward, the NE CSC can be a resource as Acadia’s future climate unfolds.