Notes From the Field: Don’t Count All Your Eggs Until They Hatch 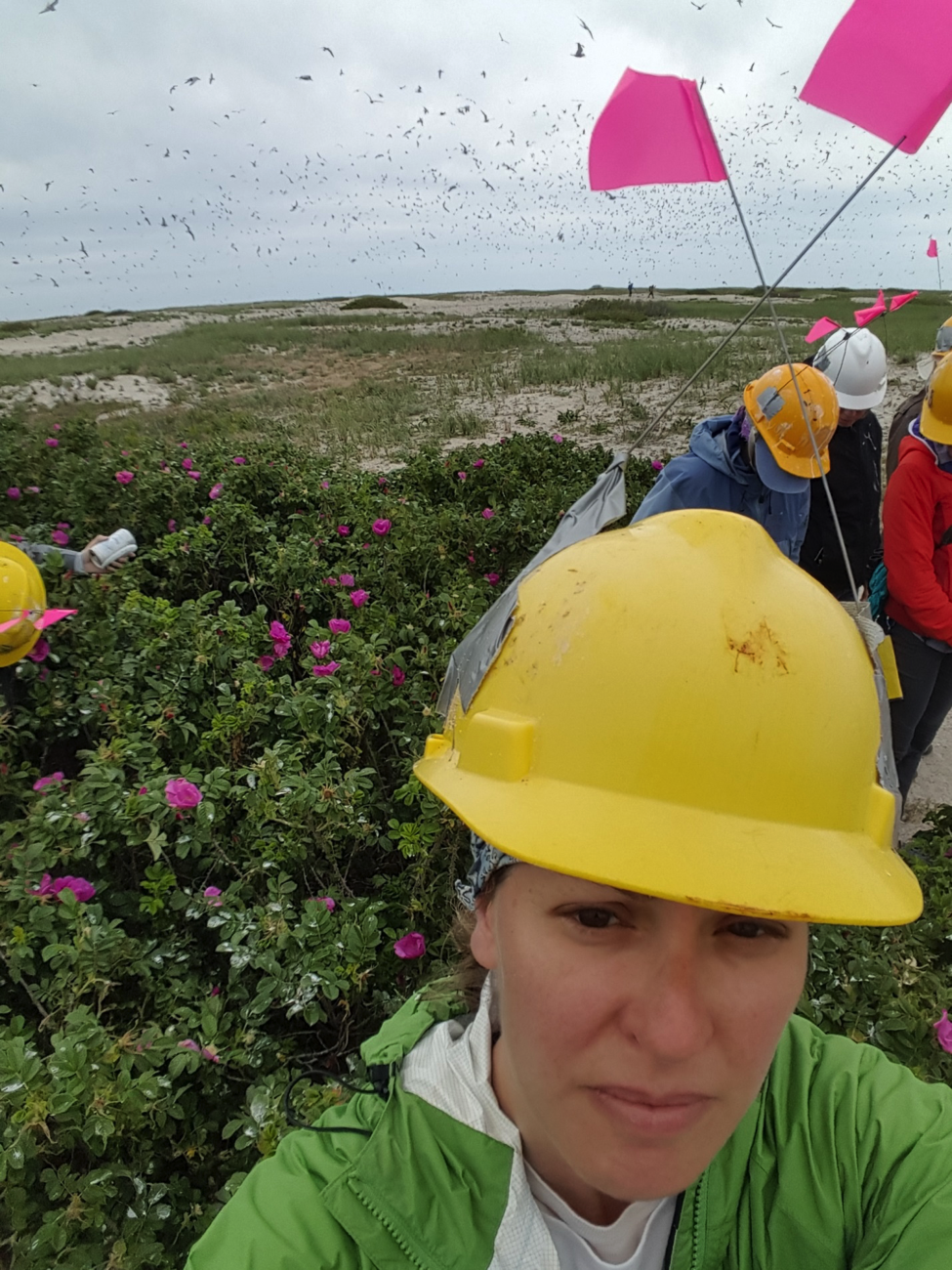 In both cases, she has been observing and evaluating the monitoring protocols and potential climate change impacts on resident shore and seabird colonies. Monomoy and Seal Island NWRs have a few similarities but are vastly different in their potential risk to climate change. Monomoy NWR is a series of low-elevation, sandy, barrier islands with shrub vegetation. This geomorphology makes it a highly dynamic system that shifts in response to tides, storms, and sea level rise. Conversely, Seal Island NWR is a rocky island made mostly of granite. There are rocky and pebble beaches in the intertidal zone, and there is a decent amount of upland habitat, which allows seabirds to nest in the summer, and gray seals to haul-out and pup in the winter. Overall Seal Island NWR has a diversity of cliffs, ledges, boulder, and upland habitat with ample low lying coastal vegetation to support a high diversity of sea and shore birds including populations of common and arctic terns as well as Atlantic puffins, razorbills, black guillemots, common eiders, double-crested and great cormorants, and Leach’s storm-petrels.

Trekking Monomoy off the Coast of Massachusetts

Led by USFWS Wildlife Biologist, Kate Iaquinto (also a graduate student in the Department of Environmental Conservation at UMass, Amherst), Michelle and other volunteers trekked back and forth across North Monomoy island through poison ivy and thorny rose bushes counting nests, eggs, and chicks of the resident population of laughing gulls and common terns. As part of the project, Ecological and management implications of climate change induced shifts in phenology of coastal fish and wildlife species in the Northeast CSC region, Michelle is interested in how climate change is influencing the phenology, or timing of recurring life events, of coastal fish and wildlife – in this case, egg hatching, chick development and provisioning of nesting shore and seabirds. Michelle participated in the census to learn more about how the long-term data are being collected as well as to better understand the climate information needs of regional refuge managers. Nesting terns and gulls can be quite aggressive in defending their nests; as such all census participants are required to wear fashionable protective headgear. No participant left the island without being pooped on.

Seal Island NWR is one of the locations where Atlantic puffin colonies have been successfully restored after they were nearly extirpated from the Gulf of Maine. Both islands support some of the largest nesting colonies of common terns along the Atlantic coast and are important areas for maintaining populations in the future.  While Michelle spent four days on Seal Island NWR, this is a comparatively short time considering NE CSC Fellow, Keenan Yakola spends his entire summer on the remote island while he conducts his Masters research and serves as Island Supervisor for Project Puffin. There are no buildings on Seal Island NWR except one small USFWS cabin, and a few bird-watching blinds. At night, there is no noise except for the ocean crashing on the rocks and the eerie but beautiful calls of the storm petrels.

While on Seal Island NWR, Michelle assisted Keenan and his team on several foraging and growth surveys that have been routinely conducted on tern and puffin populations for decades. Productivity studies of terns and puffins track egg laying and hatching as well as chick growth (weight and wing cord length) until fledging. Foraging rate and behaviors track the amount of effort parents invest in raising their young through observations of the number of feedings as well as what food is being brought to chicks during an established time period. Re-sighting surveys also serve to provide records of individual banded birds over time.

During the foraging surveys, Michelle and Keenan saw evidence supporting one of the main questions that their study is seeking to address – how does the quality, availability, and most importantly (since this is a phenology study) the timing of food resources to the birds affect chick growth and survival? Terns and puffins must swallow their prey whole and therefore they are limited in what they can eat in terms of the size and body depth of prey they are fed by their parents. Michelle and Keenan observed puffins returning with a range of prey, including butterfish. Butterfish are a deep-bodied, warm-water associated species that have been observed more and more often in recent years. It is unclear why puffins bring these back to their chicks since they are too big and the wrong shape for their chicks. Anecdotally, in years when butterfish have been provided to puffin chicks, there appears to be poorer growth and survival. Terns rely heavily on a few species of lipid-rich fish such as hake, herring and sandlance. These are also some of the preferred prey of puffins. While observing Arctic Terns, Michelle and Keenan saw delivery after delivery of small invertebrates -amphipods, euphausiids, and even a salp (a jelly like organism). After trading notes with some of the other observers doing similar surveys on the island that day, they heard reports of moths and terrestrial insects being fed to tern chicks. These are not ideal prey for the birds, but seem to be a desperate attempt by the parents to feed their chicks something, anything. Was this a bad day, a bad week, month or year? Keenan’s thesis will explore these questions using the long-term dataset that has been collected since the 1980s by Audubon’s Project Puffin.

The study of climate change impacts on fish, wildlife and their habitats is complicated and has many angles to consider. The focus for this project is to better understand when and how the food resources are changing and affecting seabird and shorebird survival with an eye on the horizon of how future oceanographic patterns may further alter the ecosystem. However, these nesting seabirds are also subject to rising sea levels, which may force them to adjust where they nest. There are many unanswered questions about what the carrying capacity of the islands can accommodate as area is lost to the ocean waters. Puffins and razorbills may be most at risk as they nest in burrows near the intertidal zone. While it seems likely that they have the adaptive capacity to adjust their behavior and move their burrows up in elevation, there is less boulder berm habitat at higher elevations and it is unclear how this re-distribution might increase interactions with highly territorial terns that like to nest in on the plateaus just above the rocky slopes.