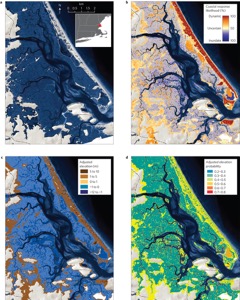 NE CSC Affiliated Investigators Erika Lentz and Rob Thieler, of the USGS Coastal and Marine Science Center in Woods Hole, along with NE CSC PI, Radley Horton of Columbia University and co-authors have produced a comprehensive sea level rise study of the Northeast’s coasts incorporating the dynamic responses different coastlines are expected to have to changing conditions of land and ocean.

For example, barrier islands may migrate inland, build dunes, change shape, or be split by new inlets as tides, winds, waves and currents sculpt their sands. Marshes trap sediment and break down decaying plants into new soil, which may elevate them sufficiently in some areas to keep pace with sea-level increases.  Read more from the USGS press release, below.

Up to 70 Percent of Northeast U.S. Coast May Adapt to Rising Seas   New model corrects assumption that drowning is only scenario for low-lying coasts

Much of the coast from Maine to Virginia is more likely to change than to simply drown in response to rising seas during the next 70 years or so, according to a new study led by the U.S. Geological Survey. The study is based on a new computer model that captures the potential of the Northeast coast to change, driven by geological and biological forces, in ways that will reshape coastal landscapes.

In a paper published Monday in Nature Climate Change, the researchers reported that 70 percent of the Northeast Atlantic Coast is made up of ecosystems that have the capacity to change over the next several decades in response to rising seas. For example, barrier islands may migrate inland, build dunes, change shape, or be split by new inlets as tides, winds, waves and currents sculpt their sands. Marshes trap sediment and break down decaying plants into new soil, which may elevate them sufficiently in some areas to keep pace with sea-level increases.

While most sea-level rise models that cover large areas show low-lying coastal land converting to open water in coming decades, many of these inundation models over-predict the land likely to submerge. The USGS model, developed in collaboration with Columbia University’s Earth Institute, produces a more nuanced picture of sea level rise as a mosaic of dry land, wetlands, and open seas, rather than as a uniform response across the landscape.

The USGS model is the first to factor in natural forces and make detailed predictions from the 2020s through the 2080s over a large coastal area, some 38,000 square kilometers (about 9.4 million acres). It is an advance over most regional models, which project drowning as the only outcome as the oceans rise. These are often referred to as “bathtub models” and assume the coast is progressively submerged as sea levels rise.

Projections from inundation models are straightforward: some coastal land will remain above the levels of the rising seas and some will drown. The new model includes the potential for dynamic coastal change and shows where in response to future sea levels, coastal lands fall on a continuum between dry land and open water.

“Geologists have always known that the coast has some potential for give and take,” said lead author Erika Lentz, a research geologist at the USGS Coastal and Marine Science Center in Woods Hole, Massachusetts. “But the standard bathtub models of sea level rise don’t reflect that. This approach couples what we do know about these systems with what we still need to learn—how different ecosystems may respond to different sea-level rise scenarios— to estimate the odds that an area will persist or change instead of simply drown.”

By casting results in terms of odds, the new model provides a more accurate picture of sea-level rise vulnerability for informing adaptation strategies and reducing hazards, the USGS researchers say. They make it clear, however, that just because an area is less likely to drown might not mean it is less vulnerable. “Our model results suggest that even natural changes may pose problems,” Lentz said. “For example, the likelihood that barrier islands will change could impact the infrastructure and economies of coastal communities, and the barrier islands or marshes may not protect coastal communities in the same way they do today.”

In fact, the outcome is uncertain for the Northeast’s low-lying developed coastlines, where seawalls, buildings and other immovable structures thwart some natural processes. The model found the region’s developed coastal lands lying 1 meter (about 3 1/2 feet) or less above sea level will likely face a tipping point by the 2030s, when humans’ decisions about whether and how to protect each area will determine if it survives or drowns.

A 2012 USGS study identified the densely populated region from Cape Hatteras to Boston as a hot spot where seas are rising faster than the global average, so land managers urgently need to understand how their coastal landscape may change, said John Haines, coordinator of the USGS Coastal and Marine Geology Program.

“The model allows us to identify vulnerable areas, and that information can be very valuable to land managers as they consider whether to protect, relocate or let go of certain assets,” Haines said. “Even when the results are uncertain, it’s useful to know there’s a 50 percent chance that an important habitat or infrastructure project may be lost in a few decades.”

To come up with their model for the Northeastern United States, the researchers mapped all coastal land between 10 meters (about 33 feet) above sea level and 10 meters below it, from the Virginia-North Carolina line to the Maine-Canada border. They factored in a variety of forces that affect coastal change, from planetary phenomena like the movement of Earth’s tectonic plates to local ones like falling groundwater levels that cause land surfaces to sink. Looking at parcels of 30 meters by 30 meters—about the size of two NBA basketball courts side by side—they weighed the balance of forces on each parcel.

Using scenarios that assume humans will continue adding moderate to high levels of greenhouse gases to the atmosphere through the 21st century, the team projected global sea level rise for the 2020s through the 2080s, and applied that to the coast. The model then estimated the likelihood, from 0 to 100 percent, that each parcel will persist above sea level at the end of each decade.

Predictions for many parcels fell close to 50 percent in the first few decades, a tossup between drowning and surviving. The uncertainty was greatest when the researchers had to wrestle with more than one question that can’t yet be definitively answered. Among them are, how fast will seas rise, can coastal marshes make new soil quickly enough to stay above the waves, and what engineering strategies will people use to protect some shorelines?

“By building in our understanding of the sea level rise response of the coastal landscape, we’re providing a more realistic picture of coastal change in the Northeastern U.S. over the next several decades,” Lentz said.

The researchers’ next step will be to group the basketball-court-sized parcels into larger areas, such as major coastal cities, national wildlife refuges, and national seashores, and assess the vulnerability of these areas to future change and drowning. This information may assist decision makers as they develop management priorities to address longer-term coastal challenges.

This research was supported by the USGS Coastal and Marine Geology Program and the Department of the Interior Northeast Climate Science Center (NE CSC), which is managed by the USGS National Climate Change and Wildlife Science Center. The NE CSC is one of eight that provides scientific information to help natural resource managers respond effectively to climate change.

Photo at top:  Comparison of predicted outcomes for Plum Island, Massachusetts.  From B. Strauss at Climate Central’s Surging Seas project