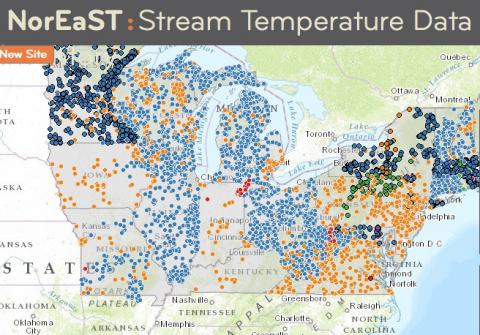 Jana Stewart and her NorEaST web portal team have been busy! The NorEaST web portal was developed to serve as a coordinated, multi-agency regional framework to map and store continuous stream temperature locations and data for New England, Mid Atlantic, and Great Lakes States. Stream temperature monitoring locations and metadata can now be viewed for over 9000 monitoring locations across 22 states. Contributions to this effort have been made by 41 different organizations including state and federal agencies, universities and other institutions.

Because this is a community driven web portal, the NorEaST team has given a range of overview presentations to stakeholders in the Northeast region including webinars organized by EPA and TetraTech (December 2013), with the NY Department of Environmental Conservation (January 2014) , the NY Chapter of the American Fisheries Society meeting for GAP stakeholders (February 2014), and the New England Association of Environmental Biologists (NEAB) given as part of Stream Temperature session (March 2014).  They also plan to present at the upcoming Stream Temperature Data and Modeling Meeting II hosted by EPA Region I, USFWS, North Atlantic LCC, NE CSC, and USGS Conte Lab this May. In addition the NorEaST team has several stakeholder engagement meetings planned in the coming months to give progress reports to contributors to the web portal, generate participation in the testing of the portal, coordinating with other monitoring networks, and finding ways to assist the post-Sandy monitoring and adaptation efforts.