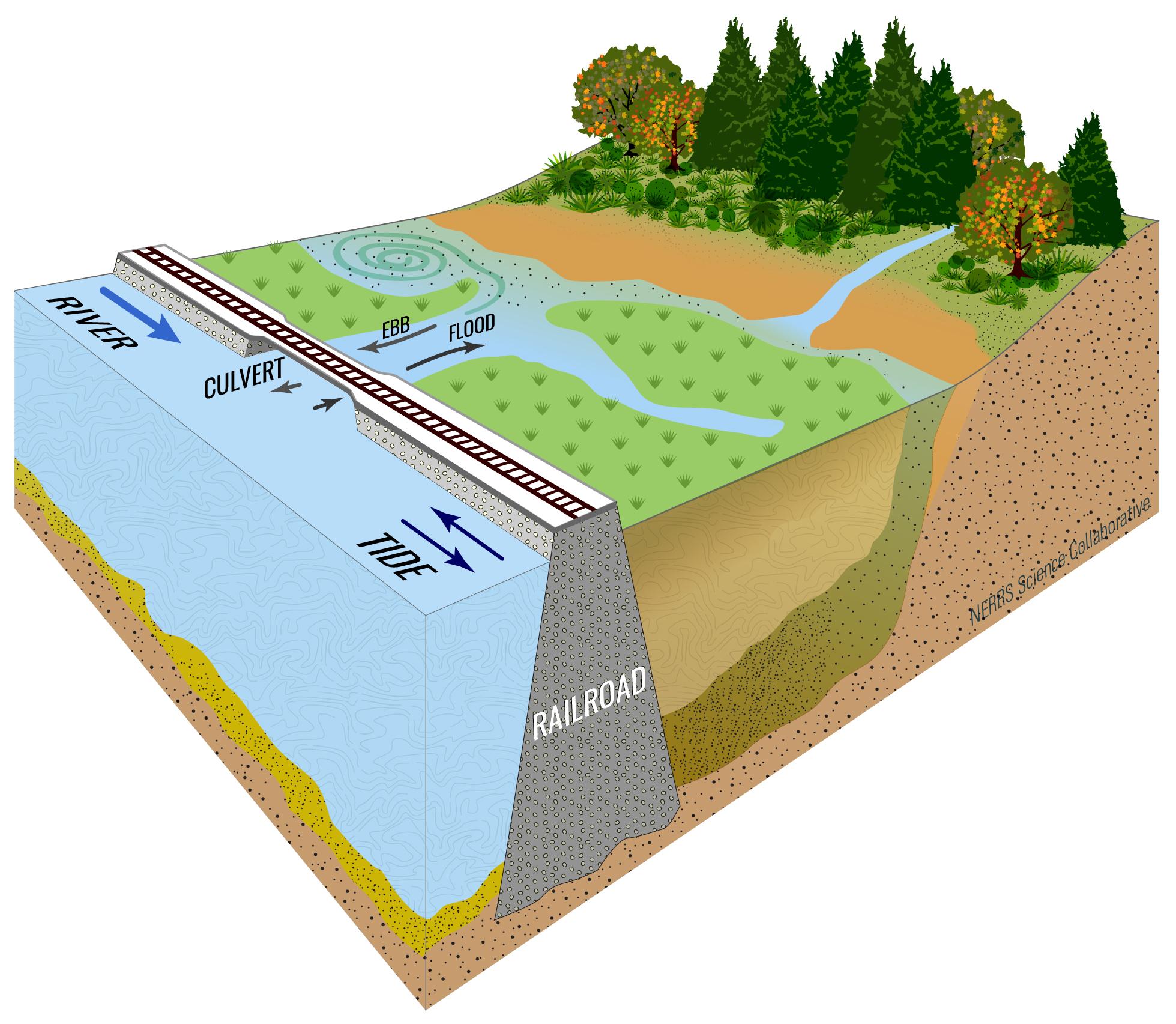 A new study led by NE CASC researchers Brian Yellen and Jonathan Woodruff shows that Hudson River Estuary marshes are growing growing upward at a rate two to three times faster than sea level rise, suggesting that they should be resilient to accelerated sea level rise in the future. Published in Earth Surfaces and Landforms, this research addresses a global concern regarding tidal marshes–that they will be drown by rising seas–while also providing a framework for Hudson River-area land trusts and state agencies to use in implementing land acquisition and land conservation strategies.

Tidal marsh creation and restoration have become important along the Hudson River due to the many benefits they offer to fish, wildlife, and people. In addition to serving as a first line of defense against coastal flooding, marshes also provide habitat for juvenile commercial fish species and migratory birds, mitigate climate change by storing carbon, and filter nutrient runoff.

This work was recently featured on the UMass Amherst website. Read the full announcement below.

Read the Earth Surfaces and Landforms Article >>
View the Project >

In a new study of tidal marsh resilience to sea level rise, geologist and first author Brian Yellen at the University of Massachusetts Amherst and colleagues observed that Hudson River Estuary marshes are growing upward at a rate two to three times faster than sea level rise, “suggesting that they should be resilient to accelerated sea level rise in the future,” he says.

Writing in Earth Surface Processes and Landforms, Yellen and colleagues documented that more than half of Hudson River tidal marshes formed since 1850. That year, the channel was straightened and a riverside railroad, berms, jetties and human-made islands of dredged soil were built. This all trapped sediment and created backwaters that often – but not always – turned into marshes, an “unintended result of early industrial development,” they state.

Yellen notes that for this “very collaborative” study, the researchers took advantage of “an experiment that has already happened over decades or centuries. Many of these accidental tidal marshes worked; they protect the shoreline and provide one of the richest ecosystems in terms of direct ecological and human benefits.”

Further, marshes are “really useful,” he adds – as a first line of defense against coastal flooding, essential habitat for juvenile commercial fish species, they store huge amounts of carbon that mitigates climate change, they provide habitat for migratory birds, filter nutrients coming off the land “and they’re beautiful.”

Their research involved seven sites spanning more than 100 miles of the Hudson Estuary, “from Wall Street up to Albany,” Yellen says. The bays where tidal marshes developed started out six to seven feet deep and have steadily grown vertically. “One concern for marshes globally is that they will be drowned by rising sea level, but this case study shows how marshes can be created and it gave us some timing benchmarks for what is considered a tricky ecosystem restoration,” he adds.

The researchers used two main methods to investigate the river’s history and resilience in the face of sea level rise – sediment cores that shed light on how fast sediment accumulated and historical maps, charts and aerial photos to determine how the sites have changed over time.

Yellen summarizes, “As long as there is space for sediment to accumulate, new marshes can develop. There is a community of land trusts up and down the river who are planning now for future sea level rise and considering where new marshes can form. This research will help them and state agencies guide land acquisition and land conservation strategies adjacent to the river to 2100 and beyond.”

The research, part of the Dams and Sediment in the Hudson (DaSH) project, was supported by a grant to Ralston from NOAA’s National Estuarine Research Reserve Collaborative, plus the U.S. Geological Survey and the Department of Interior Northeast Climate Adaptation Science Center at UMass Amherst.

Also, Lau received a Polgar Fellowship from the Hudson River Foundation for her senior thesis project. She took the lead on one of the sites and made a short film about tidal marshes around the world and the Hudson River marsh near her home in Queens.