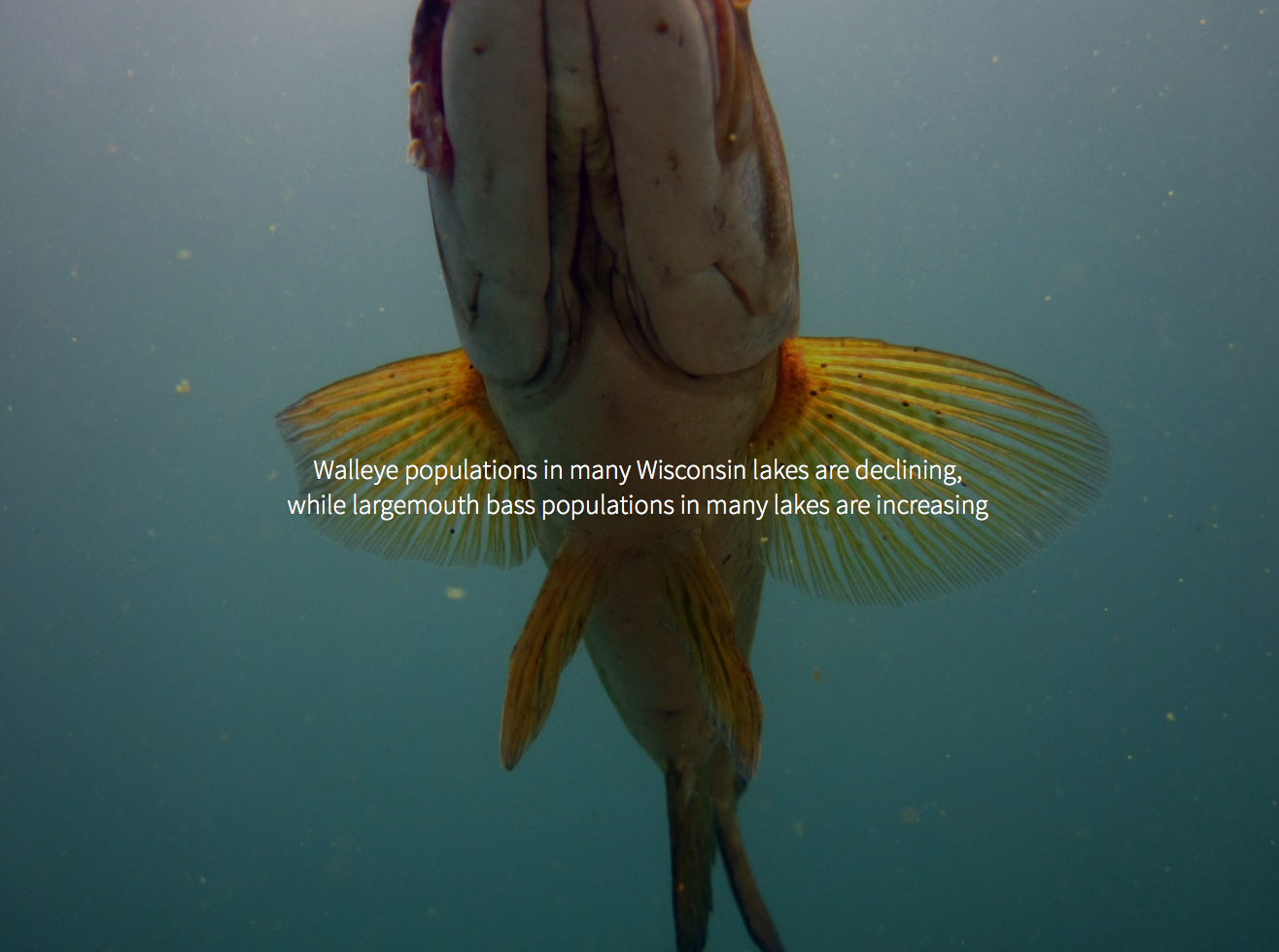 As part of the NE CSC-funded project, "An Integrated Assessment of Lake and Stream Thermal Habitat Under Climate Change", led by NE CSC Affiliated Investigator Jordan Reed of the USGS, this interactive data visualization website makes the results of a new study more accessible to a non-technical audience.    The study, "Projected shifts in fish species dominance in Wisconsin lakes under climate change", authored by Gretchen Hansen, Jordan Reed, Johnathan Hansen and Luke Winslow, published in Global Change Biology, describes lake-specific suitability for walleye and largemouth bass populations in over 2100 Wisconsin lakes under contemporary and future climate conditions. The researchers simulated past and future lake temperatures using a mechanistic lake temperature model and identified characteristics of lakes most suitable for each species. Many lakes were predicted to shift from supporting walleye to being more suitable for largemouth bass as climate warms; however, the magnitude of these changes depend on lake size, depth, and water clarity. Even under extreme warming conditions, nearly 100 resilient lakes were predicted to continue to support naturally reproducing walleye populations in the future and should be protected from other stressors.

Release Date: SEPTEMBER 12, 2016
A recent study looks at the impact of climate change on certain fish in Wisconsin lakes.

MADISON, WISCONSIN – Climate change is predicted to alter sport fish communities in Midwestern lakes, according to a new study that related water temperature to suitability for walleye and largemouth bass in more than 2,100 Wisconsin lakes.

According to the study, this downward trend in walleye populations is likely to continue as climate change will cause lakes to get warmer overtime. Researchers identified characteristics of lakes where walleye or largemouth bass were most likely to thrive and found that both species were strongly influenced by water temperature. While walleye populations thrived in cooler, larger lakes, largemouth bass were more abundant in warmer lakes.
“Generally this means that lakes that are best for walleye are not the best for largemouth bass, and vice versa” said study author Gretchen Hansen, former Wisconsin Department of Natural Resources research scientist currently with the Minnesota DNR. “Going forward, we predict that many Wisconsin lakes are going to become more suitable for largemouth bass, and less suitable for walleye.”

The suitability of individual lakes for supporting walleye and largemouth bass was based on a computer model that estimated daily water temperatures from 1979-2014 for thousands of lakes using information on lake size, depth, water clarity, and historical weather. “We don’t measure water temperature in many lakes,” said co-author Jordan Read, U.S. Geological Survey civil engineer. “Modeled lake temperatures can fill the gaps and provide fisheries managers and researchers with a full historical record of water temperature for each of these lakes.”

Future lake temperatures were also forecasted for the 2,100 lakes using mid- and late-21st century climate projections and the study authors emphasized that the diversity of lakes will determine how they will respond to climate change.

“Wisconsin’s lakes are going to get warmer in the future, but how much warmer they will get varies among lakes” said study co-author Luke Winslow, USGS research hydrologist.
By accounting for variability among lakes in how they respond to climate change, researchers estimated how individual lakes and their fish communities were expected to respond to future warming.
The percentage of lakes likely to support natural reproduction of walleye was predicted to decline from 10 percent to less than 4 percent of Wisconsin lakes by the middle of the century. At the same time, the percentage of lakes with conditions conducive to high largemouth bass abundance was predicted to increase from 60 to 89 percent of lakes within the same timeframe.

Notably, when projected changes are considered in terms of total lake area, the story is more optimistic. The percentage of lake acreage likely to support natural reproduction of walleye was predicted to decline by a much smaller amount, from 46 to 36 percent by mid-century. “Walleye populations in large lakes appear to be more tolerant of warming than walleye populations in small lakes” explains Hansen.

The study predicted improved conditions for largemouth bass in more than 500 lakes that are not currently suitable for either species, representing expanded fishing opportunities for bass anglers. The percentage of lake acreage with conditions conducive to high largemouth bass abundance is expected to increase from 28 up to 85 percent by the middle of the century.

The research team continues to pursue the question of how fish communities in lakes are likely to change in the future, with current work focused on expanding their analysis to include lakes in Minnesota and Michigan.
This study, which was funded by the Department of Interior Northeast Climate Science Center, with additional support from the National Climate Change and Wildlife Science Center, and the Wisconsin DNR Sport Fish Restoration funds, was published in the journal Global Change Biology and can be read here.

Learn more by visiting https://owi.usgs.gov/vizlab/climate-change-walleye-bass/ where you can read more detailed information about the study’s findings, and examine predictions for individual lakes throughout Wisconsin with an interactive map.