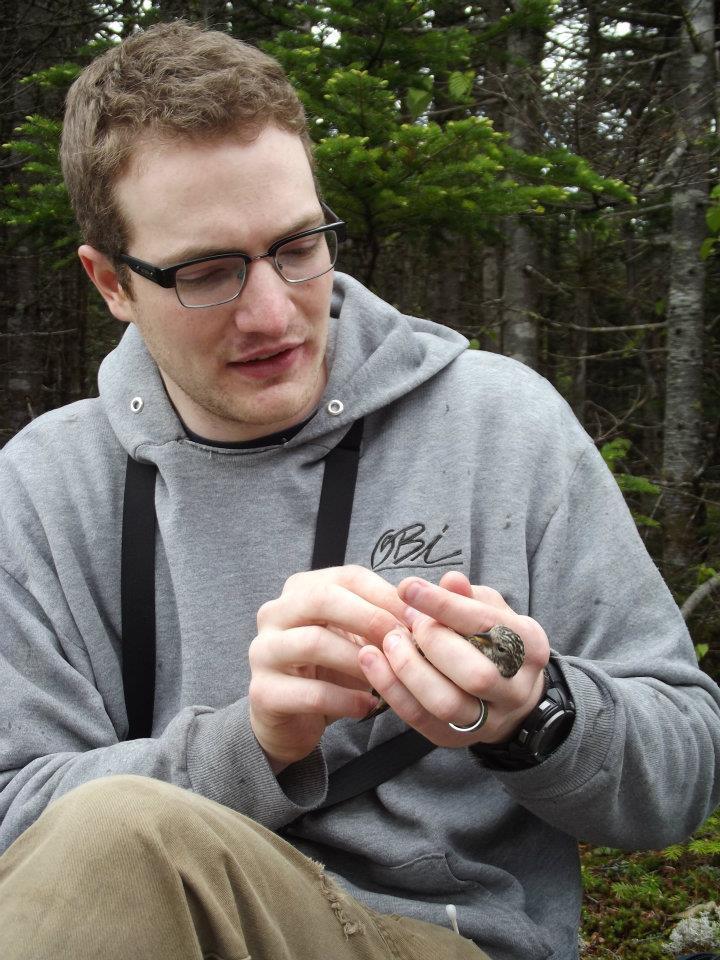 Continent-wide bird surveys play an important role in conservation, says avian ecologist and NE CSC Postdoctoral Fellow Joel Ralston at the University of Massachusetts Amherst, but they can miss rare or isolated species whose habitat is off the beaten path, such as at high elevation or in a dense bog. Now Ralston and colleagues report for the first time how combining data from several local point counts offers a new picture of how birds in hard-to-reach habitats are faring.

Their analyses of data from 16 point count programs conducted in spruce-fir forests in the Northeast and Midwest show that populations of four species considered ecological indicators for the boreal forest, Bicknell’s thrush, yellow-bellied flycatcher, magnolia warbler and blackpoll warbler, are in significant decline. Two other species, the gray jay and evening grosbeak, previously believed not to be of conservation concern, also showed significant declines with this method.

Ralston says, “This is the first time anyone has combined local point count data from several different sources to estimate population trends at a larger spatial scale for these spruce-fir forest-dependent species. This is the first time we have a regional look at trends in this group of birds.” Details appear in the current issue of Biological Conservation.

Habitat-specialist species do not show up well in national-level survey programs like the Breeding Bird Survey and National Audubon Society’s Christmas Bird Count because they live where most observers don’t go. For example, the Breeding Bird Survey is a roadside survey, Ralston says, “but the birds we wanted to study don’t usually live by roads. They live in remote bogs, in thick, hard-to-penetrate spruce forests and on tops of mountains.”

Local point counts have been conducted for decades in these areas, but observers usually report their data only to a small group of interested colleagues and the information has never been compared across surveys or regions.

For this study, the researchers identified point counts conducted between 1989 and 2013 in spruce-fir habitat in Minnesota, Wisconsin, Michigan, Maine, New York’s Adirondack and Catskill Mountains, Vermont’s Green Mountains, and New Hampshire’s White Mountains. They included counts that could offer at least eight years of data. They identified 14 bird species as either obligates, those that prefer and use only spruce-fir forests, or associates, those that prefer spruce-fir but can use other forest types.

In combining these data, the researchers controlled for differences in how surveys were conducted and detection probabilities to estimate population trends in abundance for 14 species. When possible the researchers estimated trends for each species separately in the Northeast, in the Upper Midwest and across the whole study region.

Ralston notes, “These species are mostly declining, and that’s especially true for the obligates. It’s a group of birds we’ve been concerned about, and our results support that concern.” The authors point to factors such as pressure on spruce-fir woodlands from commercial forestry, human-centered development, insect pest outbreaks and climate change as worrisome hurdles for spruce-fir specialist bird species.

The avian ecologist says the way he and his colleagues present results of this work should be particularly helpful to conservation managers because it lets them look at the data in several different ways, including the overall picture for a species, by region, or within a single local survey. “We hope the methods we’ve introduced are useful to our colleagues concerned about spruce-fir birds, but also to anyone studying any type of rare community requiring management and conservation,” he notes.

It can be important for managers to see data by region because there might be places where a species is not declining, Ralston points out. “You can pick those out from our results, and local managers really need that information.” For example, the analysis did not find any birds declining in high-elevation habitats in the Adirondack and Catskill mountains. “Even birds declining regionally seem to be doing OK there,” he says.

An example is the Swainson’s thrush, which is declining across the United States according to national surveys such as the Breeding Bird Survey, while Ralston and colleagues find populations at high elevations in the East are significantly increasing. He explains, “We think it’s because this species is moving up the mountain. Our co-authors at the Vermont Center for Ecostudies have been noticing more and more Swainson’s thrushes in their high elevation surveys in recent years, and our results support their local observations at a regional scale. National surveys that don’t sample high elevation forests have missed this.”

Overall, the study highlights the need for more formal monitoring in rare and inaccessible habitats, the authors state. Authors with Ralston at UMass Amherst are Bill DeLuca and David King, plus Gerald Niemi of the University of Minnesota Duluth, Michale Glennon of the Wildlife Conservation Society, and Judith Scarl and Daniel Lambert of the Vermont Center for Ecostudies. This work was funded by the Northeast Climate Science Center at UMass Amherst,which provides scientific information to help land managers effectively respond to climate change.