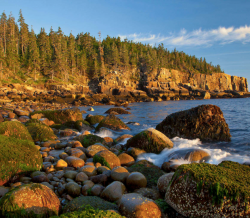 As countless scientific studies and news stories have documented, anthropogenic climate change is expected to have profoundly negative impacts on wildlife, habitats and ecosystems around the globe. In the coming decades, multitudes of species will be subjected to increasing environmental stress, and biodiversity may significantly decline.

Less commonly understood, however, is the extent to which the conservation of climate change refugia may serve as an effective climate adaptation strategy. Areas that are relatively buffered from climate change, refugia can provide short-term protection for native species in addition to sustaining biodiversity and ensuring ecosystem function in the long term. In effect, these spaces serve as  “slow lanes” embedded within faster climatic changes occurring in a broader landscape or region. These slow lanes allow species, communities, and ecosystems to persist in spite of climate change by dampening the pace of that change, thereby "buying" additional time for them.

Roughly a decade old, the concept of climate change refugia remains obscure to many within and beyond the scientific community. Interest in this idea has steadily grown, though, and now a new special issue of Frontiers in Ecology and the Environment, a leading academic journal, promises to bring it into focus. Published at the beginning of June, the special issue addresses a wide spectrum of topics in the field, including refugia related to water, fire, fish, wildlife, forests, and the entire boreal biome.

“The special issue offers a look back at how far we’ve come and a look forward to what’s still needed, highlighting conservation successes as well as what more remains to be done, says Toni Lyn Morelli, editor of the issue and a Northeast Climate Adaptation Science Center research ecologist.

Morelli is a founding member of the Refugia Research Coalition (RRC), a national network of scientists and resource managers funded by the Northwest and Northeast Climate Adaptation Science Centers to advance refugia research and translate it into conservation on-the-ground.

“We formed the RRC about five years ago to share ideas, hold workshops, engage with practitioners, and share our science,” Morelli recalls. The productivity of this group has helped place regional CASCs at the forefront of refugia research and inspired Morelli to propose a special issue of Frontiers in Ecology and the Environment to the journal’s editors.

Although the issue’s nine articles engage a wide range of ideas and issues fundamental to the understanding of climate change refugia, a unifying theme is its call to broaden the scope of refugia management by moving beyond the narrow focus on climate and landscape factors to a more comprehensive understanding of this vital topic. Accounting for ecological complexity, scale and species’ ability to adapt to changing conditions, such an understanding will better capture the conservation potential of refugia. As Morelli notes, “Networks of small, connected refugia might sustain some populations and could play a supplemental role in enabling species to persist.” Combining approaches for identifying refugia that operate at varying scales and focus on disparate ecological processes will, she suggests, allow a more thorough assessment of climate change refugia as an engine for adaptation.

Given the advances in refugia research and theory highlighted within the special issue, resource managers are now more fully equipped to put refugia conservation into practice, a circumstance that may help shift the terms under which climate change is most frequently discussed. “Climate change refugia conservation is an opportunity for hope, a chance to be proactive in a time of adversity and uncertainty,” says Morelli.