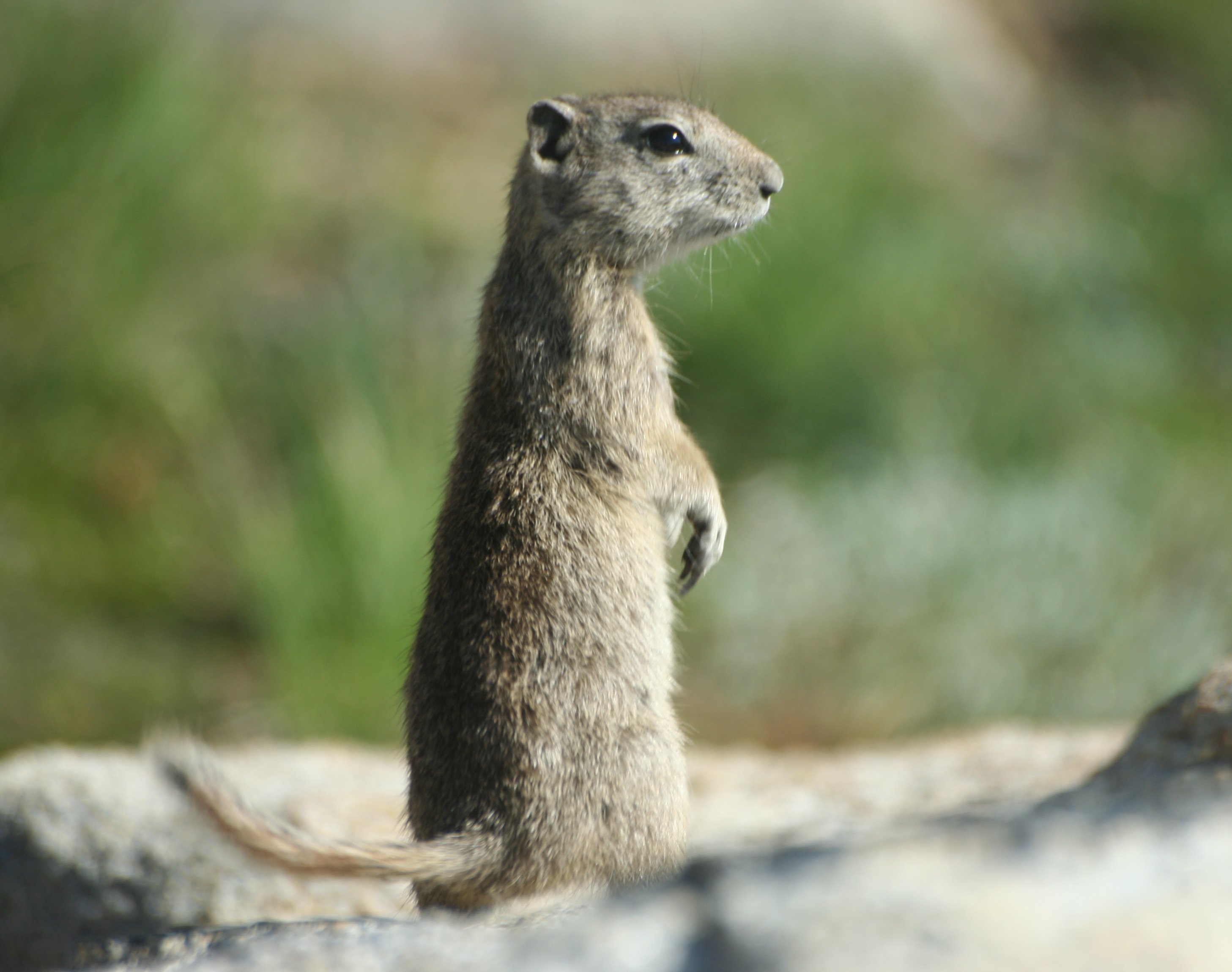 Evil cannibal squirrels may be an essential piece of California's hydrological system.  And they're disappearing.  Research conducted by NE CSC Postdoctoral Fellow Toni Lyn Morelli on the Belding's ground squirrels may have an impact on the public perception of this pest in California's agricultural fields.

Among alfalfa farmers in Northern California, Public Enemy No. 1 is a promiscuous, photogenic fur ball that weighs only half a pound and spends most of its life asleep. But with the critter helping the state weather its worst drought in 1,200 years, that perception may soon be a thing of the past.

The diminutive Belding’s ground squirrel, an important link in the food chain for coyotes, bobcats, foxes, weasels, and raptors, has a long and troubled history as a major agricultural pest.

Blame the squirrel’s voracious appetite for alfalfa. Blame its fleas, which can carry plague. Above all, blame the complex network of burrows it digs, which trip up livestock and damage farm machinery.

All told, there are few animals in greater need of an image makeover than the rodent known to biologists as Urocitellus beldingi, and to detractors as pot gut, sage rat, and picket pin.

But now, courtesy of climate change and California’s record-setting drought, Belding’s ground squirrels may be on the brink of a reversal of fortune. The same rodents responsible for millions of dollars’ worth of lost crops and damaged equipment might just turn out to be highly valuable ecosystem engineers, a designation reserved for organisms that modify their habitats, improving ecosystem stability and health.

In this case, the same burrowing behavior that wreaks havoc on cultivated land can be of enormous benefit to the high-altitude meadows that are the Belding’s ground squirrels’ natural habitat. These meadows play a key role in storing and filtering the parched Golden State’s water supply.

“Belding’s are beneficial to the meadows if, as we suspect, they act as ecosystem engineers and help aerate and otherwise affect the soils of the meadows they specialize in,” says Toni Lyn Morelli, adjunct assistant professor and program manager with the Department of Interior Northeast Climate Science Center based at the University of Massachusetts.

“These meadows are then more effective at filtering and holding the water that eventually trickles down, so to speak, to be the water that is drunk and used by the majority of the state of California,” says Morelli.

Unfortunately, the prospect of newfound favor comes at a time when Belding’s ground squirrels may be scampering toward extinction. While few farmers would mourn their demise, scientists see it as part of a disturbing pattern clearly driven by climate change.

When biologist Joseph Grinnell set out a century ago to document it, California’s natural diversity was already diminishing. The founding director of the Museum of Vertebrate Zoology at the University of California at Berkeley believed human activity — irrigation, cultivation, and deforestation — was to blame.

A research team led by Morelli revisited some of the sites documented by Grinnell in search of the Belding’s ground squirrel. Their findings were most unexpected: The animal had disappeared from nearly half of the sites where Grinnell had reported them.

“We were surprised to see such a dramatic decline in this species, which is well-known to Sierran hikers and was thought to be fairly common,” Morelli says. “In fact, the rate of decline is much greater than that seen in the same region for the pika, a small mountain-dwelling cousin of the rabbit that has become the poster child for the effects of global warming in the contiguous United States.”

Morelli saw a clear connection between the Belding’s disappearance and climate change. The areas where the squirrels could no longer be found were the ones that had gotten hotter. They were also the areas where precipitation patterns had markedly changed.

There was one exception, however: The squirrels had made themselves at home on lower-lying cultivated land such as alfalfa fields and other irrigated areas that serve as an oasis amid hotter, drier conditions.

In some of these human-modified habitats, the squirrels have not only survived, but thrived. To the chagrin of farmers, Belding’s have achieved a density of more than 100 per acre while feasting on crops of alfalfa, rye, wheat, barley, and oats.

Besides California, Belding’s ground squirrels can be found in parts of Oregon, Utah, Idaho, and Nevada. Like the much larger prairie dogs they resemble, they’re highly social creatures that depend on their numbers for survival and their burrows for safety.

They’re among few species that engage in altruistic behavior, standing upright and whistling to alert others to impending danger even as the whistle-blower becomes an easy target for predators.

While a single squirrel will sacrifice itself to warn others of danger, the disappearance of the species is a warning humanity would be wise to heed. The Sierra Nevada’s approximately 17,000 high altitude meadows are drying out, which exacerbates California’s ongoing water crisis while making survival harder for the Belding’s squirrel.

Normally, the annual winter snowpack protects the soil from degradation caused by fluctuations in temperature and precipitation. But after years of excessive variations in both, the soil is becoming less porous. This makes it less able to trap moisture and slowly release it into the streams.

The Belding’s ground squirrel also relies on an insulating blanket of snow to protect it during a hibernation that can last up to nine months, the longest of any mammal. Without consistent snow cover, Morelli suspects, the squirrels froze in their burrows. Others likely drowned, she says, since rain and snow that fall on dry soil are poorly absorbed and therefore more apt to cause flooding.

Early thaws followed by more winter weather can be equally deadly, as researchers discovered in the 1970s when a Sierra Nevada snowstorm hit eight days after the Belding’s ground squirrels had begun to emerge from hibernation.

The squirrels stopped mating, their weight dropped sharply, and they became more susceptible to predators. Some depleted their fat reserves and starved. Similar scenarios may have played out in other sites from which the squirrels have vanished. With climate change expected to bring greater swings in temperature and extreme weather, these patterns are likely to continue.

Even apart from the challenges of extreme weather and shrinking habitat, Belding’s ground squirrels face precarious odds in their struggle for survival. Hibernation takes an enormous toll. Biologists who tracked a population of Belding’s ground squirrels in the central Sierra Nevada for 11 consecutive seasons found that more than one-third of adults and two-thirds of young never re-emerge from their long winter’s nap.

Those that do can live four or five years, relatively long for a rodent. But on average, males live only half as long as females, partly because they severely injure one another fighting for the right to mate on the one day a year when the female is fertile. On that day, the female mates with multiple males, producing an average litter of eight a month later.

During their active period in the summer, they gorge on leaves, stems, bulbs, fruits, and occasionally each other, doubling their body weight. In the cultivated fields where squirrels have taken up residence, “there are areas that have been chewed to the soil,” Morelli says. “They look like crop circles, like aliens have landed.”

In one study by the University of California Statewide Integrated Pest Management Program, an estimated 123 squirrels removed 1,800 pounds of crop per acre in 44 days.

By treating farm fields as a free buffet, the squirrels have curried no favor with their human landlords who rely on those fields for their livelihoods.

“I’ve talked to locals and been told, ‘I hire high school kids, give them a box of 22’s, and a dollar a tail for their efforts,” says James Patton, emeritus professor of integrative biology at UC Berkeley, and curator of mammals at the museum founded by Joseph Grinnell.

“Burrowing animals provide tremendous positive benefit that is completely ignored by everyone,” says Patton, who places soil restoration at the top of the list. “In addition, they eat grasses, which keeps grass on the landscape. Because of that, they keep more water in the landscape. And that also prevents erosion.”

With climate change and the California drought throwing its ecosystem services into sharp relief, the crop-eating pest may be recast from reviled rodent to high elevation hero — provided the species survives.