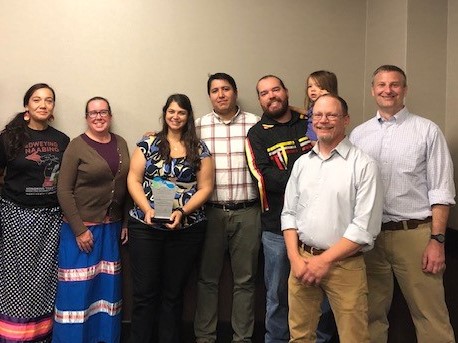 Two members of the NE CASC, principal investigator Chris Caldwell and Midwest Tribal resilience liaison Sara Smith, recently joined a diverse group of collaborators in receiving the 2019 Climate Adaptation Leadership Award from the Association of Fish and Wildlife Agencies. Caldwell, Smith and their fellow team members were recognized for their development of Dibaginjigaadeg Anishinaabe Ezhitwaad: A Tribal Adaptation Menu, which provides a framework for integrating Indigenous knowledge, history and language into climate adaptation planning.

Chosen for the award from a national nominee pool, the Tribal Adaptation Menu team was one of only seven individuals or groups to be honored this year. According to the award selection committee, the Tribal Adaptation Menu serves as “a noteworthy advance in the on-going process of recognizing and promoting Indigenous perspectives that can help confront some of today’s most pressing challenges,” such as adaptation to climate change impacts.

The process of creating the Tribal Adaptation Menu brought together a wide range of contributors representing Tribal, academic, intertribal, and government entities in Minnesota, Wisconsin, and Michigan. Similarly, the principle of inclusivity played a key role in tthe Menu’s development. While the first edition of the project reflects Ojibwe and Menominee perspectives, the Menu was flexibly designed so that it can be adapted to the language, culture and knowledge of other Indigenous communities.

Tribal Adaptation Menu team members have been disseminating their work since its completion and recently held a major three-day workshop at the College of Menominee Nation to assist tribal natural resource managers successfully utilize the menu. The workshop assisted participants with the identification of key goals and obstacles in tribal natural resource management as well as the development of strategies to engage tribal community members in adaptation decisions.

Published by the Great Lakes Indian Fish and Wildlife Commission, the Menu is intended to work with the Northern Institute of Applied Climate Science (NIACS) Adaptation Workbook. This project received support from a variety of organizations, including the NE CASC.