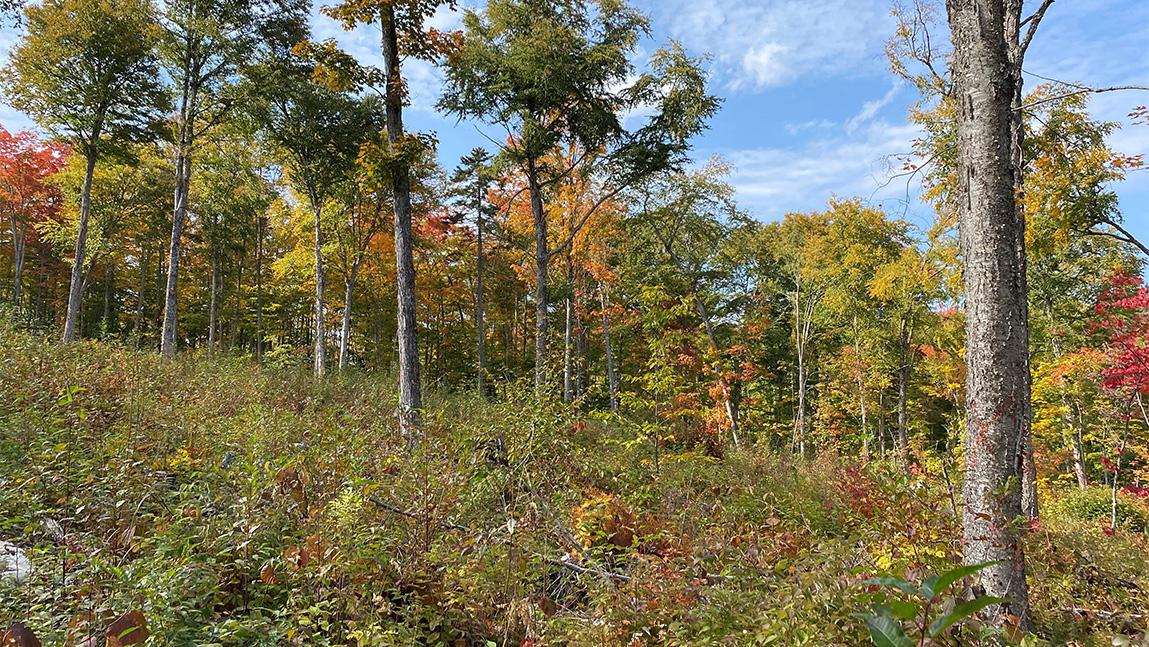 A tree stores carbon in the form of wood, bark, roots, and leaves, so it stands to reason that if we cut fewer trees and allow them to grow, forests will store more carbon. But, if all forests across the landscape become "late successional"--or mature in age and structure--such a habitat would not be beneficial for all wildlife species. Indeed, many species require early successional habitat made up of young trees, shrubs, and openings created by natural or human-caused disturbances.

In the Northeast’s spruce-fir habitat, the imperiled Canada lynx is sustained by its prey, snowshoe hare, which often prefer young forest stands. Many other mammals and birds require adjacent patches of both mature and early successional forests.

How can we balance the carbon storage of old forests with the young, more open habitat needed to conserve many of our wildlife species?

One answer, according to University of Vermont (UVM) researchers, is to create a mosaic, or patchwork, landscape. Managing for a diversity of forest, shrub, and grassland habitats for at-risk wildlife species forms a heterogenous landscape.

“The importance of diverse habitat conditions across the landscape may be increasingly overlooked, especially by the public, as forest carbon storage takes center stage,” said Caitlin Littlefield, a former NE CASC fellow and lead scientist for Conservation Science Partners.   “As more attention is focused on maximizing forest carbon, we risk unintentionally compromising the long-term sustainability of other objectives, such as maintaining important habitat for at-risk wildlife species.”

To make their case, the authors examined four forest and open woodland habitat types in the Northeast and Upper Midwest. This region transitions from hardwood forests and more northern spruce-fir forests to grasslands and oak savannas in the west and to sandy pine barrens of the coastal Northeast. These habitats support some of the greatest wildlife diversity in the temperate zone between the tropics and the arctic.

In each of the four ecosystems, the authors found that managing only for mature stands of trees fails to provide critical habitat for sensitive wildlife species. Restoration of these four habitats across the widespread landscape will support biodiversity, increase resilience to change, and may ultimately store more carbon over time by resisting carbon loss from catastrophic disturbance like severe wildfires and drought-induced stress on trees. Restoring these habitats often involves reintroducing natural disturbances and practices such as controlled burning.

“Characterizing trade-offs and critically evaluating the consequences of alternative management options can help avoid practices that may ultimately reduce ecological complexity and the adaptive capacity of forested systems,” said D’Amato. “This sort of critical evaluation of stand-level management actions can then facilitate landscape-scale planning that supports a diversity of habitats while also suggesting where we ought to invest in maximizing forest carbon.”

The golden-winged warbler has experienced one of the steepest declines of any North American songbird. The bird nests near the ground in early successional patches of two and a half acres or more and often relies on surrounding mature forest for foraging.

“Wildlife that require early successional habitats in the Northeast include nearly 90 different kinds of birds, mammals, reptiles, and insects, many of which are ‘species of greatest conservation need,’” said Jim Oehler, Wildlife Habitat Program Supervisor for New Hampshire Fish and Game Department. “Strategic, carefully planned, and carried out forest management is critical to restoring and maintaining healthy populations of these species, particularly in light of climate change.”

Relative to mature forests, early successional forests store less carbon overall, but they do sequester, or capture and store, carbon at relatively high rates. This, in combination with a mix of wildlife habitat across the landscape, would compensate for the trade-off of not pursuing maximum carbon storage.

“This paper affirms the value of conserving and maintaining an array of forest conditions, including early successional forests, on public and private lands and reinforces the importance of not focusing on a single objective, like simply maximizing on-site carbon storage,” said Michael Snyder, Commissioner of Vermont Forests, Parks and Recreation. “As demonstrated by this work and by initiatives like Vermont Conservation Design, wildlife habitat restoration and active forest management are becoming more critical for conserving and connecting a diversity of habitat types across the New England landscape.”

Tallgrass Aspen Parklands of Northern Minnesota
In northern Minnesota, tallgrass aspen parklands, a patchwork of grasslands, groves of aspen trees, shrub thickets, peatlands, and wetlands, support wildlife species that benefit from this natural mosaic of vegetation. Islands of trees and shrubs provide important movement corridors for elk, which have rebounded through restoration efforts from regional extirpation in the early 20th century. Elk rely on scattered tree cover for protection but venture into open areas for grazing.

Although cutting some trees means losing out on their carbon storage, intact grasslands and peatlands store an exceptional amount of carbon belowground. Rewetting of peatlands by the reconnection of waterways can reduce carbon emitted from burns smoldering underground while supporting localized groundwater recharge. This risk reduction is all the more important as climate change amplifies wildfire and drought threat.

Midwestern Oak Savannas
The oak savannas of southern Michigan and elsewhere in the Midwest historically contained scattered fire-tolerant oak trees, with deep tap roots and sprouting ability, growing in an understory of grasses and flowering herbaceous plants, such as wild blue lupine. This habitat is critical for the federally-endangered Karner blue butterfly, which lays eggs almost exclusively on lupine.

The savannas now occupy a fraction of their pre-European settlement area due to agricultural conversion, logging of oak trees, and ongoing land-use change. The pockets of savanna that remain are increasingly dense and shaded with fewer fire-adapted trees and less herbaceous species diversity, as wildfire and Indigenous burning have been excluded from the landscape.

Many imperiled wildlife species, such as the eastern box turtle, depend on the oak tree’s unique rooting structure, on native plants, and on the patchiness of vegetation that frequent fire creates. This is another ecosystem in which the thinning of trees and burning of woody plants required to maintain open savanna conditions reduces tree carbon. But again, native grasses supply tremendous belowground carbon storage capacity. A matrix of shaded and open conditions provides climate change protection that supports wildlife species in adapting to increasingly hot, dry conditions.

Coastal Pitch Pine Barrens
The imperiled pitch pine barrens, in sandy inland pockets along the coastal Northeast, historically supported fire-adapted pitch pine, thickets of scrub oak, and an understory of blueberries. Here, too, fire exclusion has resulted in denser stands of trees and establishment of competitive and invasive species. Rare and dwindling wildlife species, including the New England cottontail rabbit, barrens buckmoth, and birds such as the whip-poor-will, rely on the barrens.

Balancing Trade-Offs
In applying a lens of climate adaptation to these four case studies, Littlefield and D’Amato reveal trade-offs between carbon and wildlife habitat and highlight landscape-scale management paths that accommodate both goals. Promoting habitat for some imperiled wildlife species is incompatible with maximizing tree carbon storage in each particular forest or woodland. But, by pursuing a mosaic of habitat conditions at the landscape scale, natural resource managers protect ecosystem adaptive capacity—and therefore carbon—in the face of climate change while accommodating a range of wildlife species’ needs.

“It is critical to recognize that climate change itself is one of the most serious threats facing wildlife in this region and globally,” said Littlefield. “We don’t have the luxury of unlimited time to devise the ‘perfect’ balance of maximizing carbon storage and wildlife habitat across the landscape. Assessing vulnerabilities and risks, explicitly acknowledging trade-offs, and prioritizing ecological complexity and landscape heterogeneity may well be the best way to keep carbon out of the atmosphere while protecting wildlife and hedging our bets in an uncertain future.”

This article was written by Shari Halik and originally appeared on the website for the University of Vermont's Rubenstein School of Environment and Natural Resources.